Every once in a while, there's a song that comes along and you stamp the seal of "classic" on it. For me, recently that song has been "Soldier" by Erykah Badu. "Soldier" is a track on Badu's album called New Amerykah (Part One) 4th World War released in 2008. The track begins with a banging beat which leads you into several stories of American history and world issues. Some of the events include September 11th and Hurricane Katrina. I think there is a strong possibility Badu would have included a reference to the tragedy of the Boston Marathon bombing in the song if the song had been released after the tragedy. The song raises awareness and forces the listener to acknowledge the heavy issues in our society. For example, she says, "You get the wake up call/When you saw the buildings fall."  Please listen below...


I thought the album cover was cleverly designed by artist Emek.net. I like the way he used symbols in  Badu's fro. Because she is a natural hair icon, I thought it was really cool to use an Afro. Each symbol has a story attached to it. For example, on the top right there is a man holding a sign while standing on a house. I know it represents the victims of Hurricane Katrina. I also love the artwork for the single, "Soldier". It seems to to be a mother and son robot cultivating music. If you look closely, you can see the "7" on the boy robot's chest. I assume this represents Badu's son since his name is "Seven". I love the fact that Erykah Badu is conscious of the microphone. She is well aware of music's impact on the masses, and she is not afraid to discuss real life issues that make people think. Well done Emek.net and Erykah Badu! 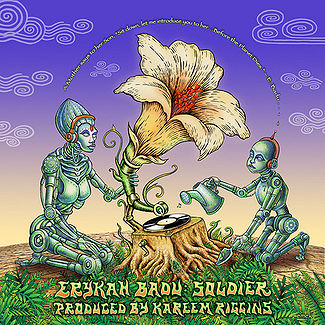 Badu also posted a link to her Chicago performance of "Soldier" on Twitter this week. "Yesiree!"

What do you think of the song,"Soldier"? What symbols do you recognize in the artwork of her fro?