This morning, I scrolled down my Facebook feed to find a message from Fox 29 News about the latest Cheerios commercial. The commercial features a biracial little girl (Grace Colbert) whose mother appears to be white and father appears to be black. The little girl walks into the kitchen and asks her mother if Cheerios is really good for your heart. Her mother says "yes" and explains why. In the next scene, you see her father waking up on the couch with a pile of Cheerios on his shirt.

I thought the commercial was very cute. It's nice to see an interracial family on television. I think many people can identify with the family. The Cheerios commercial received cheers from some people, but others weren't so happy with the family. The Daily News said, "The cereal brand was forced to pull comments from its YouTube page after a cereal commercial featuring an interracial family reportedly prompted a string of messages about Nazis, racial genocide and viewers so disgusted they 'want to vomit.'" 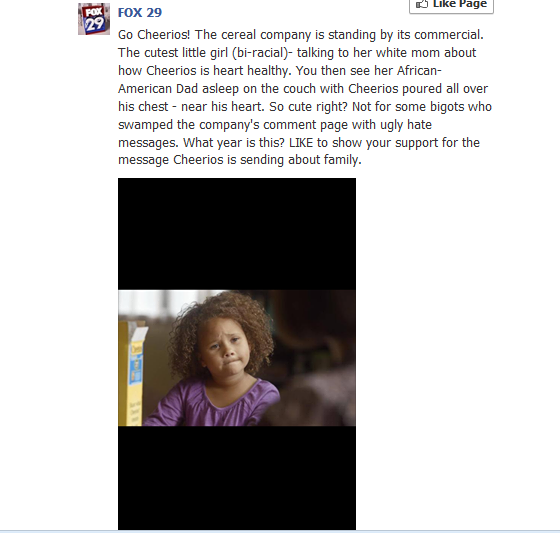 What do you think?

You can also voice your opinion on the 1BlessedNatural Facebook page!