Breaking Down the "Emotional Half-fro" on Black-ish

Last night's episode "Oedipal Triangle" of the new hit comedy Black-ish on ABC dealt with the idea of the "emotional half-fro." Dre's mother, Ruby (played by Jenifer Lewis) comes to visit the family, and Rainbow is not happy about it because she knows that she questions her parenting. She also judges her "blackness" or ability to relate to Black life. Rainbow is bi-racial. When Ruby takes it upon herself to give Diane an Afro, she makes it clear to Rainbow that she feels she is not in touch with her Black side. I think the "emotional half-fro" represents this idea

Dre lays out rose petals and the works for his mom Ruby, but Rainbow is not trying to hear it. Ruby puts on an elaborate display to show that she is in touch with her roots. This includes cooking soul food, keeping it "absolutely 100", and my all time favorite:  keeping her "Zulu Cherokee blend" Afro. Diane, who is Dre and Rainbow's youngest daughter compliments Grandma Ruby on her 'fro. This prompts her to give Diane the same hairstyle.

When Rainbow confronts Ruby and tells her that she cannot change Diane's hair without her permission, Ruby points out the fact that she feels she is not Black enough by telling her that she makes "real food." She also tells her she can go back to her yoga and therapy. After Dre sets up a peaceful situation between Ruby and Rainbow, Ruby pulls out the hot-comb and proceeds to straighten Diane's hair back to the way her mother wanted it. I cracked up when she asked Diane to hold her ear to avoid burning it. I remember those times! Diane and Bow get into an argument leaving the little girl with half her hair in an Afro and the other half straightened. After Dre asks Zoe, his oldest daughter to fix her sister's hair, she says, "By trying to make Mom and Grandma equal, you've created an emotional half-fro."

I think Diane's half 'fro is a metaphor for Rainbow's identity. I also think the emotional half-fro is a great way to view the idea in the Black community that a biracial person (particularly a person who is half Black and half white) have to pick one race in which to identify.  Since Ruby questioned her Blackness, she questioned the reason for her daughter's straight hairstyle. Ruby's underlying assumption was that Rainbow straightened Diane's hair because she wasn't in touch with her Black roots, not because she didn't have the time. When Ruby first stepped into the Johnson house, she said, "I don't let anyone hot-comb out my heritage." The comedy also addresses the idea that many Black people claim they are part Native American when they are not. In response to Ruby's claims she has Cherokee hair, Rainbow responds that she is not Cherokee.


In conclusion, I think this week's episode of Black-ish uses the "emotional half-fro" as a metaphor for Rainbow's identity. The episode also identifies and pokes fun at the militant black attitude of Ruby and her assumptions. I can't wait for next week's episode!

Bonus- funny natural hair moments: When, Dre tried to fix Diane's hair, he got 3 combs and a brush stuck in it. Zoe said Diane she was tender-headed. Diane says Dre ignored her screams lol.

He told Zoe, "Good luck with that mess" lol, smh. 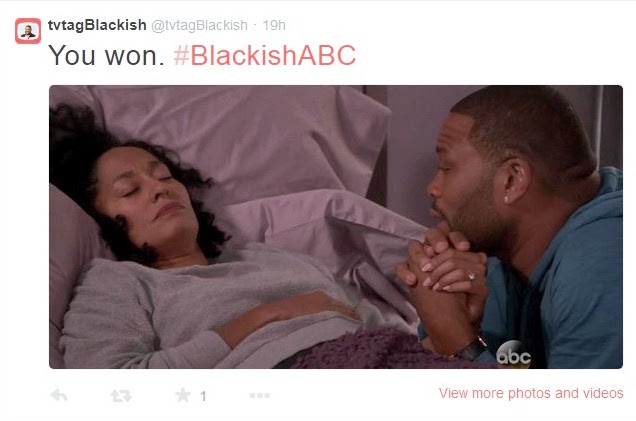 What did you think of the "emotional half-fro" on Black-ish?