Why Lupita's Response to Magazine for Removal of Natural Hair is On Point!

Thursday, model and actress Lupita Nyong'o called out Grazia, a UK magazine on social media for editing her natural hair from their front cover, and it was everything! It also showed us how we could combat ridiculous standards of beauty! The original cover photo featured Lupita wearing a black top with her head at an angle and her curled natural hair out in the back.

The 34-year-old expressed her dislike of the edited cover by saying, "I am disappointed that @graziauk invited me to be on their cover and then edited out and smoothed my hair to fit their notion of what beautiful looks like..."In her post, Nyong'o stated that she grew up with the understanding that light skin and straight hair was the standard of beauty, but now her appearance on magazine covers as her natural self gives her a chance to help others like her to see their own beauty.

She continued by saying she wouldn't have approved of the cover if she'd known about it. Nyong'o said this:

Had I been consulted, I would have explained that I cannot support or condone the omission of what is my native heritage with the intention that they appreciate that there is still a very long way to go to combat the unconscious prejudice against black women's complexion, hairstyle, and texture."

Grazia also posted a hot mess of an apology on social media stating that it was the decision of the photographer to alter Lupita's photo and that they were not aware of it. They said,"Grazia is committed to representing diversity throughout its pages and apologises unreservedly to Lupita Nyong'o." I don't know if it was just me but I was thinking at least they could've tagged her in that hot mess apology.

The one word that stood out to me the most was "diversity." Merriam Webster defines diversity as "the inclusion of different types of people (such as people of different races or cultures) in a group or organization..." Maybe the magazine is "committed to diversity" as they say, but that has nothing to do with editing out Lupita's natural hair.

So, yes. You do have a Black woman on the cover representing "diversity". However, not everything about her is acceptable to you or your "photographer. " 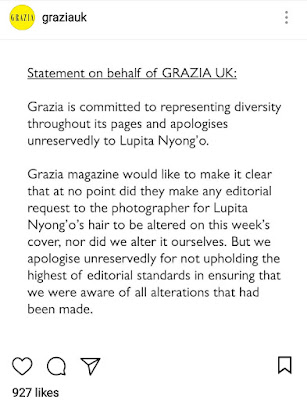 These incidents of the non-acceptance of natural hair and other Black features are going to continue to occur. Shout out to Lupita for calling it what it is! If more celebrities and people do this, these incidents will occur less often.

What do you think of Lupita's response to the magazine cover?