Fans of the beloved Bernie Mac Show got a real treat yesterday when the cast posted pictures of their reunion on social media. Camille Winbush who played Vanessa "Nessa" Thomkins on the syndicated show said, "Excuse me while I have a moment with my family." She posted a photo of herself, Kellita Smith who played Aunt Wanda, Jeremy Suarez who played Jordan Thomkins, and the youngest of them all, Dee Dee Davis who played Bryana "Baby Girl" Thomkins.

Even though the cast is about 12 years older they all still look the same. Beautiful and handsome! I think Smith must be a vampire LOL because she hasn't aged a bit. Jordan and Baby Girl grew up on us! I feel old.

The Bernie Mac Show fans were happy to see the cast but couldn't forget the most important person on the show. Bernie Mac himself. May he continue to Rest in Peace.


The Bernie Mac Show first aired in 2001 and ran for 5 seasons until 2006. It was about an uncle (Bernie Mac) and his wife (Wanda) taking in Mac's 3 nieces and nephews and treating them like their own. Mac's hilarious parenting experiences with the rest of the cast mixed with his "Hey America" confessionals made the show an American favorite to this day! 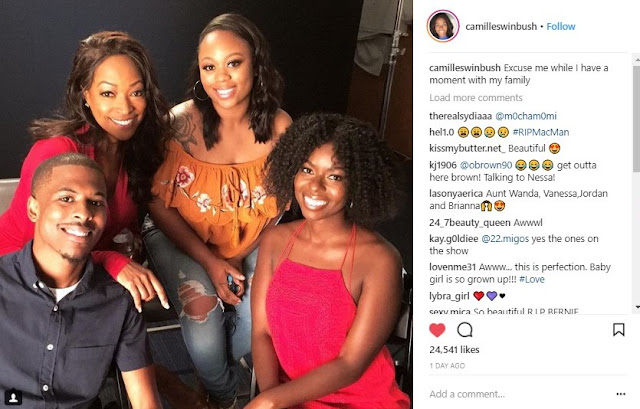 What do you think of The Bernie Mac Show reunion photos?