I have a surprise for all of you Destiny Child fans! Former member, LaTavia Roberson posted a photo of her natural curls on Instagram with the caption : Think I might start wearing my natural hair out & about a lil more :) What do u guys think? One of Roberson's fans attempted to challenge the singer, stating that she was a hair stylist and knew that her hair in the photo above was not her own hair. The singer replied  in a warm and classy way by saying, "@ipreferdiamonds aw pretty girl, I have Noo reason 2 lie. Lord knows I love a good weave,wig etc. but that's all me luv :)..." Well done, Ms. Roberson. 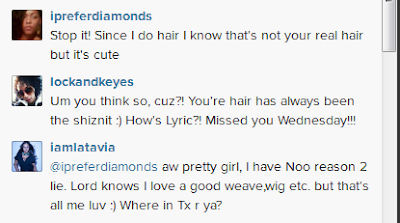 Last week, TVOne announced that the hit show, "R&B Divas: Atlanta" will return for its 3rd season and Latavia Roberson and Kameelah Williams from the 1990s R&B group, 702 will be joining the cast. Roberson, who just gave birth to a little girl named "Lyric" in August, was originally filming her own reality television show. It will be interesting to see if she rocks her natural hair on "R&B Diavas: Atlanta."


What do you think of Latavia Roberson's hairstyle?