Happy Saturday, my blessed naturals!
I have been hearing about the accusations towards QVC host Sandra Bennett stating that she made offensive comments towards a Black model wearing her natural hair on the show. The segment was for a Dooney & Bourke handbag in which Bennett and another host were discussing the details of the bag. They were stating that you will not look back and wonder why you are wearing it. Bennett adds to this when she says, "Now, you might think, "Why did I wear my hair like that? But, you'll like your bag still." During that time, the camera focuses in on an African-American woman named Michelle who is rocking the bag and her curly hair. Bennett's remarks caused a lot of outrage in the natural hair community.

After the show aired, another writer by the name of Bougie Black Girl called Bennett out on Twitter about her remarks. Since then, Bennett has released apologies on both Twitter and Facebook, but her Twitter comments were erased. Her Facebook apology is as follows: 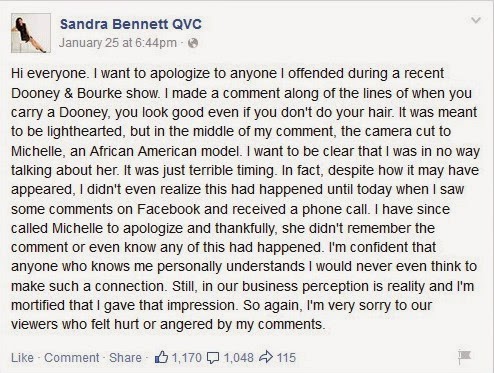 I've looked at the QVC segment several times and I have to agree with Bennett. The timing of her comment and the camera man's focus was not the best. I believe Bennett and the other host was making the point that hairstyles can look outdated, but the bag would always be fashionable. Because the camera man zoomed onto the African-American woman, it appeared as if her comments were against the model's natural hair.

While I believe the timing of the camera angles and Bennett's comments were a mistake, I do believe QVC will need to take steps to prevent this in the future. I also believe in the past before the natural hair movement, situations such as this one might have gone unnoticed by the audience. However, massive love for our natural hair is a relatively new thing, and it shows that our senses are heightened to all things and situations natural hair related. That's not necessarily a bad thing either (smile).

Do you think QVC host Sandra Bennett's comments were offensive towards the model's natural hair?