Last Sunday, actress Zendaya appeared on the Oscars red carpet in an elegant Vivienne Westwood gown and faux dreadlocks. Her hairstyle was inspired by actress Lisa Bonet. Giuliana Rancic, host of the E!'s Fashion Police commented that she felt Zendaya's hairstyle was overwhelming to her frame. She also said, "I feel like she smells like patchouli oil...or weed." Rancic's ignorant and racist comments have been shut down by people on social media. But, Zendaya's social media response is by far the best, most classy and intelligent response anyone could give.

In a screenshot of black letters against a white background, Zendaya wrote this: 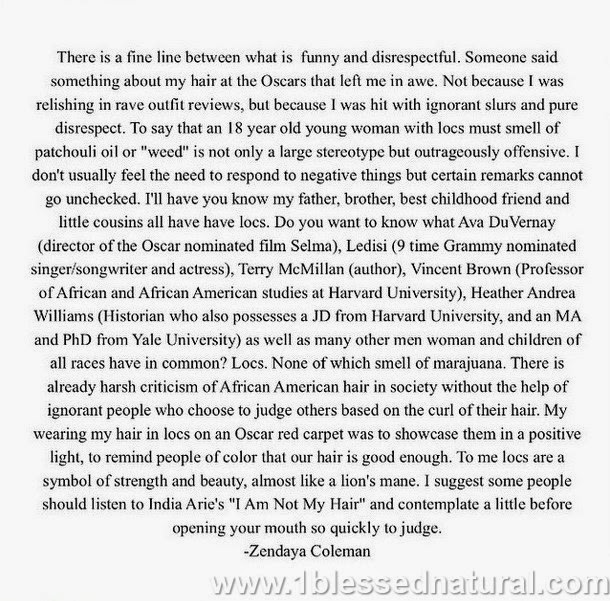 I found Zendaya's response to Rancic's ignorant and racist comments to be refreshing. The young actress identified the stereotype, and then she took the E! Fashion Police host to class! She did this all without uttering one curse word--classy and intelligent! Round of applause for her! Her words reminded me of Keke Palmer's response to a photographer who thought she was not moving fast enough. Palmer let the photographer know that her disrespect was not necessary.

I love the fact that Zendaya said that African-Americans are often judged based on their hair. She said, "There is already harsh criticism of African American hair in society without the help of ignorant people who choose to judge others based on the curl of their hair." I just love the fact that she wore her faux locs to the Oscars because the Academy Awards is criticized for its lack of diversity. The hashtag #whiteoscars is a popular one on Twitter. Zendaya wore her locs and she wore them beautifully. Point blank!


Guiliana Rancic issued an apology to Zendaya yesterday via Twitter.  She said this:

I'm glad she apologized to Zendaya because I think it was the right thing to do. However, I'm not buying it. I guess Rancic didn't learn anything from QVC host, Sandra Bennett's incident on television? I agree that all of the ignorant commentators need to follow Zendaya's advice given at the end of her statement. She said,"I suggest some people should listen to India Arie's "I Am Not My Hair" and contemplate a little before opening your mouth so quickly to judge." You can say that again!


What did you think of Zendaya's response to Giuliana Rancic's comments about her faux locs?