My Review of Cutting It: in the ATL Reunion Show 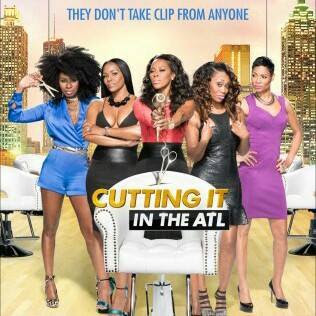 Hey, my blessed naturals,
This week's reunion show of Cutting It: in the ATL was different. Instead of having all of the girls together at the same time, Maja  (with her tablet) had one-on-one interviews with each of them.

@1BlessedNatural its not what I was expecting. I thought that would have everyone on at the same time #CuttingItInTheATL
— ♥~Superstar Nic~♥ (@superstarnic23) July 24, 2015

The first person interviewed was Beautii. Her interaction with Maja gave me a best friends kind of vibe. Maja told Beautii she was inspired to want to do business with the ladies when she came by her shop early in the season. The next subject was Dedra. Beautii said she didn't have a problem with Dedra until she found out she hired LaKenya. She said she even gave Dedra salon advice on a daily basis before then. Both she and Beautii thought Dedra's actions of pulling out and throwing money at Beautii was disrespectful. Maja gave Beautii props for raising a respectful son. There was also exclusive footage of Beautii going out on a date with one of Maja's friends.

Next, LaKenya was in the hot seat. Maja introduced her as "Little Miss LaKenya."I think all of the ladies on the show viewed her as the little girl who needed guidance throughout the season. Maja asked LaKenya to discuss her thoughts of Mushiya, Beautii, and Dedra. LaKenya didn't like the fact that Mushiya was controlling in terms of her associations, and Maja agreed. She said she preferred to keep things upbeat as opposed to negative. Although LaKenya said she doesn't know if she likes Mushiya yet, we as viewers know she does not. She also revealed she did owe Beautii money by contract for a key deposit, and Maja told her she needs to pay up. She could have saved a lot of drama, but I guess there wouldn't have been a T.V. show! When asked if she noticed anything by watching the season, LaKenya said she noticed that she'd left a lot of salons. The young entrepreneur also said Dedra was nice to her, in spite of the other ladies' experiences with her.  She said their relationship changed (for the worst) after her party. During the interview, Maja was trying to get her to change her mind about Dedra, but LaKenya did not want to pick sides. She is a grown woman and maybe she will see things eventually. She has already distanced herself from Dedra. Let her come to her own conclusions.

Mushiya a.k.a. the crazy lady was the next one interviewed. Her hair was in either in a twist or braid extensions in an updo, and I thought it looked cute. She called Beautii a "dramatunist" or one who looks for the opportunity to start drama. True! Both of the ladies agreed her spying was dishonest. Maja said she was surprised by Mushiya's acceptance of the idea of doing business and disappointed by Dedra's resistance at the brunch in episode 1. The ladies also talked about Mushiya telling Dedra and LaKenya to leave her event. Mushiya talked about the expression she uses for Dedra's mean face. She said it was about how you say things as opposed to what you say, and I think she needs to follow her own advice. The way she spoke to LaKenya throughout the season was disrespectful. Another cut scene was shared which featured Maja and Mushiya getting pedicures. Mushiya laughed at the fact that Maja shop was robbed and asked someone if they bought their hair, hinting that they might have stolen it from Maja's shop. Crazy lady!

In addition, even though Mushiya's approach was harsh towards LaKenya, she said she actually liked her. She said she just thought she should've surrounded herself with better people (a.k.a not Dedra). She felt that LaKenya needed to tell Dedra she was wrong for her actions. I think LaKenya is a grown woman who can make her own decisions. Plus, she (along with many) have already told Dedra about her actions, but she is her own person. Mushiya thinks she knows everything that goes on between them. I think she needs to let it go and stop trying to control her. Maja told her that she didn't tell her she had a hair extension line. Mushiya playfully threw it back in her face that she added natural hair to her line also. She proceeded to tell her that she was doing the whole "natural hair" thing wrong, and her hair looked a mess on the last episode. I fell out laughing!

Knowing about the mugshot and about the cake are absolutely different. To put LaKenya at fault for that is absurd. #CuttingItInTheATL
— Nero Wolfe (@MZGunter) July 24, 2015

Finally, we got what we were all waiting for - the meeting between Dedra in Maja. The whole thing had me wondering if Maja and Dedra made up before the show. When Dedra walked out, Maja said she was walking through the door like it was a runway. She said Dedra was a zero and double zero as size. The way she said it had me thinking she was making a dig at Dedra, but maybe not. I thought Dedra's multicolor print dress was pretty. The stylist admitted she was the troublemaker on the show, but she regretted the failure of her friendship with Maja. She had no regrets about her words with Mushiya. Also, did I hear her say she was a "non confrontational person"? Okay girl. Maja suggested calling Dedra's aunt, Joanette and her ex-husband to ask them about that statement. Dedra said he recently called the police on her because she was standing outside of his house. LOL, exactly!

In addition, Dedra said she would have apologized to Beautii if she wouldn't have hit her after she threw the money in her face. When Maja showed her the playback of that scene, she couldn't do anything but take a sip. She agreed that her behavior was unacceptable. Finally! Again, Dedra said LaKenya was going back and forth between the ladies. They showed a scene at a coffee shop where Dedra gave LaKenya an ultimatum. She wanted her to chose her or the other women. LaKenya basically said she wanted to be around the other ladies to learn from them, and Dedra walked out. Also, Dedra said she thought Maja was taking Beautii's side when she called her "unladylike." I was happy to see Dedra apologize to Maja. She attempted to get up and comfort her, but Maja stopped her. She said she felt hurt by Dedra's putting her mugshot on the cake. Also, we found out she spent about $100 on it. Girl, stop wasting money and cake being petty! The episode ended with Maja giving her opinion of everyone. The only one who Maja said she wouldn't do business with was Mushiya for her dishonesty about her hair extensions.

I thought the episode was okay. I did like the fact that it wasn't like most reality T.V., reunion shows where the casts fight each other. Based on the way the show ended, I think there will be a season 2. It will be interesting to see what the storyline will be. It's funny how Mushiya called Beautii out for being dishonest, but she was also dishonest. I forgot to mention there was a compilation part where Maja talked about her meds LOL. The ladies in all, seemed to have grown a little from the first episode. I hope LaKenya lets Mushiya know that she doesn't owe her any answers. Dedra seemed to want a friendship with Maja, and I hope she knows that friends tell friends the truth. If she intends to continue behaving the same way she did throughout the season, she can expect to be called "unladylike" again. We'll see if there will be a season 2!

What did you think of the Cutting It: in the ATL Reunion show?

My Review of Cutting It: in the ATL Season 1/Episode 3