The Right and "Wrong" Sides of Ayesha Curry's "Classy" Comments

Last week, Ayesha Curry posted on Twitter that she likes to keep herself "covered up", and many people have been in an uproar because of it. Curry said,"Everyone's into barely wearing clothes these days huh? Not my style. I like to keep the good stuff covered up for the one who matters." The one she was speaking of was her husband, Golden State Warriors player Stephen Curry. I didn't find anything wrong with her comment, but Twitter went crazy over it. Some say she is slut-shamming, while others agree with her. Either way, she has started a conversation that needs happen about society's expectations of women.

Curry sent out another tweet saying she was thinking about the latest fashion trends, and she prefers to be classy. She said, "Just looking at the latest fashion trends. I'll take classy over trendy any day of the week #saturdaynightinsight." In my opinion, Curry was stating her preference of dress. We find out in a later tweet that she was looking through a publication while updating her Twitter status. I know I've flipped through fashion magazines and couldn't find anything to fit my taste, but am I wrong for stating it? Nope.

In addition, The phrase 'slut-shamming" is when a woman is degraded for her choice to practice her sexuality the way she wants. So, I'm trying to understand how Ayesha Curry's words equal slut- shamming. All she did was make a statement about fashion. The one word I can see people getting upset about is that she said "everyone", but we know that can't be true because everyone does not dress the same. Plus, many fashion trends include tight or "barely there" clothing, and everyone doesn't prefer those styles. I think some people attempted to read between the lines of her words, and found things that were not there. I've also read opinions from people who have said they did not ask for her advice. However, I don't believe she gave any. 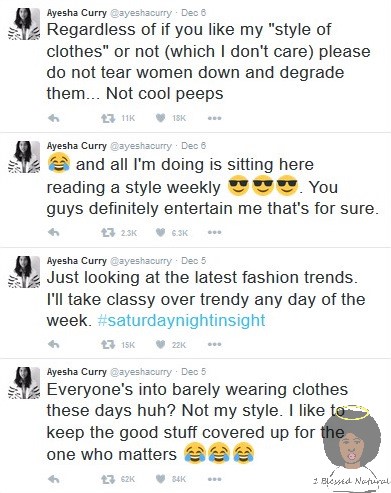 @ayeshacurry As a mother of girls you should b ashamed of urself! This is no better than saying dress modest=you won't b raped.#slutshaming
— Allegra Kiarra (@LegRahKeyArRah) December 8, 2015


In addition, the backlash that Curry received is an indication that we need to take a look  at our society. She has two little girls that are looking up to their mom.The reality is that a woman is being harshly criticized for speaking about her choice to cover up. We as women do not have to be naked to be beautiful. Many of us face pressure to look a certain way, and our bodies are often put on display in music videos, advertisements, and other forms of media. This sends a message to girls and women that we have been put on this earth to be nothing more than objects of attraction, and that is not the case. Curry also sent out a tweet asking people not to degrade women.

Ayesha Curry is not the only one who has faced backlash for making comments about her style preference. Back in August, Tia Mowry received the same response from some people on social media for posting a meme that had Lisa Bonet fully clothed and Nicki Minaj in a bikini. Below the picture, Mowry commented that Lisa Bonet's style was more like her own. Because of the backlash she received, it was taken down.

In all, it is true that Ayesha Curry's words touched some nerves, but I think more was read into them than what was there. She spoke about her preference, and there's nothing wrong with that. We live in a society that encourages women to bare all to be beautiful, but we can make the decision not to follow the trend. I stand with Ayesha Curry in stating that all day!

What do you think about Ayesha Curry's comments?