THIS is "What Happened" to Lil Kim's Face


Yesterday, Lil Kim was trending on social media after posting a photo on Instagram of her drastic physical transformation. The self-proclaimed "Queen Bee" burst on the scene in the mid 90s as one of the hottest female rappers. She was beautiful with her heart-shaped face, but there was something that happened as time went on. In the late 90s to early 2000s she began getting plastic surgery on her face, and now she is almost unrecognizable. One of the most noticeable changes is her skin, which is several shades lighter. There's some debate about whether it is makeup, airbrushing, or skin bleaching. It's left a lot of people asking what happened to Lil Kim's face. I think her change is a mixture of people's opinions and a little of what she thinks she should look like.

When Kim first came out, one of the things that drew people to her music was the confidence she seemed to possess. One of her most popular videos was "Crush On You" featuring Cease and Biggie where she pulled off wearing 4 different looks of red, green, yellow, and blue. Surely, she would have broke the internet with these looks if the video had come out today instead of 1996. At that time, Lil Kim had a cute heart-shaped face in a shade of the chocolate melanin skin that is celebrated more in this day and time than ever (I believe).

Thinking back to the 90s and many years before, one of the biggest insults in the Black community was calling someone black. Dark chocolate skin was often seen as a negative thing --colorism. If you don't know what I mean, check out the movie Crooklyn when one of the little girl characters says, "...Wit ya old black self." At the time when Lil Kim was coming out, I heard the same words on the playground myself. I can only imagine being an artist in the spotlight almost 24/7 and hearing the same thing from people in the music industry and other areas in beauty and entertainment. Did this make Lil Kim alter her face? 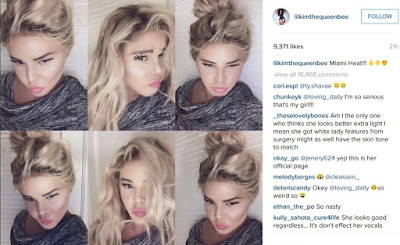 In a 2005 interview with Angie Martinez on HOT 97's radio station, Lil Kim revealed that she had her nose fixed twice due to injuries she sustained from an abusive relationship. Although she did say she loved herself several times, Lil Kim said there were still some things she wanted to change. Check out the interview here:


The photo the rapper recently posted on Instagram and earlier ones have caused speculation that she bleached her skin and changed her appearance to look white. A few years back, I had a conversation with a former co-worker about Lil Kim's transformation. The co-worker, who was white wanted to know what would make the singer alter her appearance. I made her aware that the beauty standards in the entertainment industry often lean towards those of European. This is why many Black celebrities narrow their full noses and thin out their full lips, but these types of alterations don't just apply to Blacks. We see celebrities like Kylie Jenner attempting to get fuller lips like you will find on many Black people.

Look, I'm not saying I know exactly what it is like to be Lil Kim, but I think it can help to try and view things from her side. We live in America, and celebrities often have a big impact on what is considered beautiful. However, who decides what's beautiful for them? I also think it's worth noting that a regular person may learn to accept themselves as is, but celebrities and other rich people have access to money to quickly change the things they don't like.

A few years back, actress Halle Berry made a huge statement about plastic surgery in Hollywood. In an interview with Yahoo!'s own Bobbi Brown, Berry said plastic surgery was like crack. The 49-year-old actress said there were always people around trying to persuade you to change your looks. It is probably the same pressure that caused Lil Kim, Michael Jackson (may he rest in peace), and a lot of other celebrities to permanently alter their appearance.

So, what happened to Lil Kim's face? I think we already know the answer to that question. To Kim: Keep your head up girl! 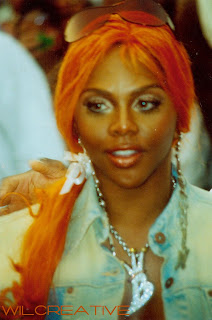 What do you think is the reason behind Lil Kim's physical transformation?