One of the hottest pictures on the internet right now is of former first lady, Michelle Obama rocking her natural hair! The photo features Mrs. Obama while on vacation wearing her thick natural hair in a ponytail.

Many of you might be thinking, "1BN, she was already natural. What's the big deal?" Well, in the eight years the Obamas were in the White House, there was never a legit picture of her wearing her natural hair in public. It was always flat ironed.

Since the picture was posted on Sunday, the natural hair community has been going wild! I think we've all been low-key waiting on this! I was thinking to myself, she is going to wear a twist-out or something after they leave the White House! lol

We see you, First Lady! 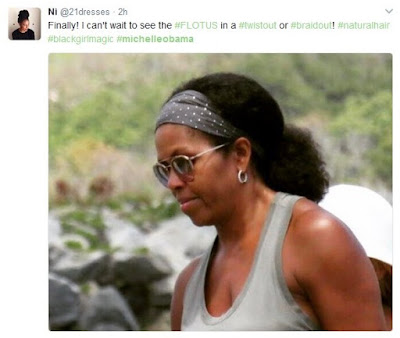 YAAAASSS! Come thru with the natural #MichelleObama! I'm so here for it! https://t.co/Ujg3XpJavq
— Michelle Lang (@MsMichelleLang) April 4, 2017

What natural hairstyle would you like to see Michelle Obama rock next?