Why is #Melanin SO Popular?


Over the last couple of years, I've noticed an increase in the popularity of the word "melanin." The word has been included in the names of clothing companies, hashtags, and other elements. Black women (including myself) all over the world are posting pictures with the hashtags like #melanin, #melaninpoppin, and #melaninonfleek. On Instagram to date, the #melanin has over 4 million public posts. What is the reason for this?

So, 1BN why is #Melanin SO Popular?
Based on my own use and observation of social media and trends, I think it's due to the posting of pictures, especially on Instagram that show the beauty of Black people. There are so many different skin tones and textures of hair, and they're all being celebrated.

Merriam-Webster Dictionary defines melanin as being, "any of various black, dark brown, reddish-brown, or yellow-pigments of animal or plant structures (as skin or hair)." It is a popular belief that melanin is only present in dark Black people, but it is also present in light skin people. It is just to a lesser degree.

Also, if you've ever wondered about freckles and why they exist, you can thank melanin! MedicineNet.com says, "Freckles which occur in people of all races are small, concentrated areas of increased melanin production." They get darker the more the skin is exposed to sunlight. 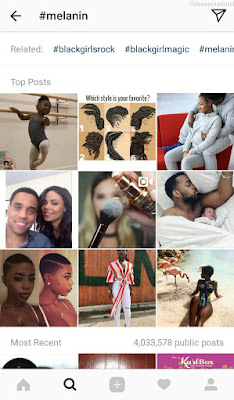 Types of Melanin
(Skin and Hair)

There are 2 types of melanin that relates to skin and hair. They include eumelanin and pheomelanin. Eumelanin gives hair and skin its dark to black color. Pheomelanin gives them a yellowish to reddish color. As a result, melanin is found in both light skin and dark skin people. There is a third type of melanin called neuromelanin which refers to a dark pigment in the brain.

Melanin is the reason why skin becomes tanned when it is out in the sun. It protects skin from the sun's rays.

What About Black People with Albinism?
There is a debate going on around the internet that asks this question: Should the #melanin movement include Black people that have Albinism? Merriam-Webster's definition of albinism is "an absence of pigment in the eyes, skin, hair, or feathers caused by a genetic defect."

Let me break it down like this: There was not one moment when everyone said let's use #melanin (and related hashtags) to refer to the beauty of Black people. This all occurred over a couple of years when internet users began noticing and using the hashtags. As a result, some people might see a picture of a dark skin Black person with the melanin hashtag and think it only refers to similar dark skin people.

If everyone who uses the melanin hashtag is not clear on what it represents, you're going to have it being represented in different ways.

Connection Between #Natural Hair and Melanin

For the last 7 years, I've watched and participated in the natural hair movement. It was and still is a time where Black women have learned to appreciate their natural strands as well as the scalp it grows out of. It's a definite shift in thoughts relating to the standards of beauty. The same thing is happening with the melanin movement, and it's awesome to witness!

Pulling It All Together!

The increase in the use of the #melanin and other related hashtags on social media is a celebration of something that Black people was once put to shame for---their skin. This goes for both light skin and dark skin. Let's go back to the porch scene in Spike Lee's movie Crooklyn when one of the little girls insulted her cousin by saying, "Ole black self..." Back in the day when I was growing up, dark skin was frowned upon. Today, I think it's celebrated more than ever, and that is why #melanin has become a movement!

Use the #1BNMelanin on social media to continue the conversation!

What do you think about the use of #melanin and other related hashtags on social media?