Actress and minister of Going Beyond Ministries Priscilla Shirer shared her natural hair story and secrets on IG Live today. After receiving numerous questions about her long thick natural hair, she decided it was time to do a video. Shirer said, "I've decided that sometimes, to a woman, hair = ministry."

Shirer started getting a perm at about 13 years old. During previous years, her mother would use the hot comb to straighten her hair. When Shirer was 24 years old, she noticed a circular patch of hair that had broken off on the side of her head. After she visited a doctor and they plucked a few strands from different parts of her hair, the doctor concluded that Shirer's hair was growing in healthy. However, it was something that she was doing to her hair that was making it break off. As a result, her doctor told her to stop relaxing her hair for 6 months.

While driving home, Shirer had a breakthrough. She originally had no intention of following the doctor's orders, but she realize that if her doctor had some other other instructions related to her health, she would've listened. Priscilla Shirer wondered why she was so attached to her hair that she was willing to forgo the doctor's instructions in order to be "beautiful" (according to Eurocentric standards). Afterward, she visited the black hair section of a small bookstore in Chicago, Illinois. There were only about 10 books on Black hair and she purchased some of them.


So...here’s the thing....I’ve been asked to do a LIVE on #naturalhair. Go figure. 🤷🏽‍♀️ Not theology. Not Biblical history. Not spiritual disciplines. H 👏🏽 A 👏🏽I👏🏽R 👏🏽. I’ve decided that sometimes, to a woman, hair = ministry. Shucks. So.....it’s going down TODAY AT 2:30pmCST. I’ll give you my “hair story” (Every curly-headed, black girl has one) and also my tried & true tips for healthy hair! (I think you might be surprised by the spiritual undertones running through it all. 😜) See you soon. Tell ya girls! #blacknaturalhair #blackhair 👑
A post shared by @ priscillashirer on May 23, 2020 at 12:02pm PDT

Next, she went to her parent's house and grabbed some elementary school photos of her hair. She saw that her ponytails were thick and was impressed by them. Her hair at the time was thin from relaxers. Shirer said that God convicted and challenged her. The way he made her was alright. She said she gave her hair back to God and He gave it back to her even better--with natural hair. Priscilla Shirer was done with relaxers. 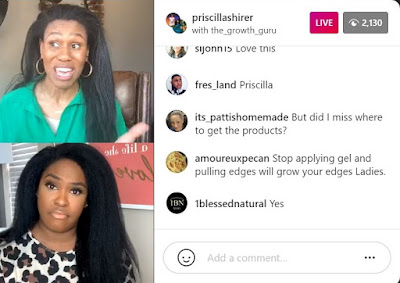 
Had the best time chatting about all things #naturalhair w/impromptu guest appearances by @the_growth_guru, @iamtammyfranklin & @kanika_evans 💜 Now listen, we carried on for two whole hours so you might want to watch it in bits and pieces! 🤣🤣🤣
A post shared by @ priscillashirer on May 23, 2020 at 2:42pm PDT

Finger coils and Afros were her styles of choice as she grew her hair out. Priscilla Shirer stressed the fact that our hair is tied to our spirit and talked about how God taught her lessons through it. She chose styles that supported the direction she was going in. For example, she stopped using heat to straighten her new growth while transitioning because that supported the act of growing out her natural hair.

As for Shirer's hair secrets... She said she limits the amount of heat she puts on her hair. Her hair is blow-dried before twisting, which is about every 6-8 weeks.   Her hair is straightened and ends clipped 2-3 times a year. One of the biggest things she does is protective styling with twists. She also likes to do twist-outs.  Her hair is finger detangled before being combed. Steaming, deep conditioning, and moisturizing are also important parts of her natural hair regimen, especially after washing.

In addition to sharing her hair secrets, Priscilla Shirer had special guests @the_growth_guru, @kanika_evans, and @iamtammyfranklin (Kirk Franklin's wife) on her LIVE.

Priscilla Shirer played in the movies War Room (2015) and Overcomer. Twists and twist-outs were mainly used for the movies. Shirer is the daughter of famed pastor Tony Evans.


What do you think of Priscilla Shirer's natural hair story and tips?


Related Articles: My Experience at the Praise 103.9 Inspiration and Music Conference