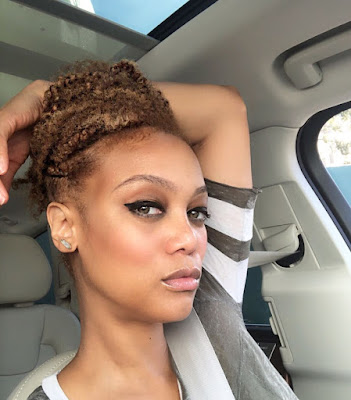 Tyra Banks is catching heat on Twitter for her behavior on her hit TV show America's Next Top Model (AMNT). Many Twitter users are watching old episodes of Banks' treatment of the aspiring models and calling it "problematic" at the very least. America's Next Top Model is a show where women compete to get a modeling contract to be the "next top model". Each episode features challenges like go-sees, makeovers, and photo shoot contests that are supposed to evaluate the contestants' dedication and skills. The show began in 2003 and has continued 23 seasons.
Banks is not only the creator of the show but also a judge on it. At the end of each episode, at least one girl is eliminated based on her performance. Judges like Nigel Barker, J. Alexander, Janice Dickinson, and more provide feedback to the girls before a decision is made. In one episode, Tyra can be seen chastising one of the Black girls named Danielle in cycle 6 who refused to get her gap fixed during her makeover. Tyra said, "Do you really think you can have a CoverGirl contract with a gap in your mouth?" When Danielle asked why not, Tyra said that was all people would see and "it's not marketable".


**Please visit the FAQ section of the ModelLand website for more information**... In light of the recommendations and guidance of federal, state, and local government officials, and of experts from the WHO and other organizations, we have decided to postpone the opening of ModelLand. We will continue to monitor the situation and determine a new date to open that is appropriate and safe. ModelLand has been in the making for more than 10 years and we remain excited to bring our wondrous world to you and will wait to welcome you to our attraction when the time is right. During this uncertain time, please take care of yourselves. Find ways to connect with your loved ones digitally and utilize this time to organize and prepare for the unexpected. We will see you on the other side of this!
A post shared by Tyra Banks (@tyrabanks) on Mar 18, 2020 at 8:05am PDT

Also, In cycle 4 of AMNT, model Kahlen lost one of her childhood friends. Later on in the episode, the girls were asked to do a photo shoot in a graveyard appearing extremely insensitive. One Twitter user pointed out that fact when they said, "Thinking about how [sic] tyra made one of the competitors pose while being lowered in a grave when their friend just died the day before."

Since the old clips of Banks have resurfaced, it has also caused Twitter users to examine her feud with fellow model, Naomi Campbell. In 2005, Tyra Banks said that the media started the feud because the belief  in the 80s and 90s was there was no room for more than one Black supermodel. The Tyra Banks Show host asked Naomi to apologize for being mean to her, but many Twitter users feel it should be the other way around.

I remember being in college and AMNT being one of my favorite TV shows. Still, I noticed things like the Kahlen incident. I also remember being turned off after watching Yaya DaCosta on cycle 3 having to apologize for being too African. The models had to choose their outfits as part of a challenge and DaCosta went with an African cowboy-inspired look. It was too much for the judges because one of them said, "You have this sort of intensity to prove your sort of African-ness and I think that sometimes it's overbearing." DaCosta attempted to put the judge in her place and let her know that her "African-ness" came very naturally to her because it was a part of her. Tyra stepped in and told her that she was all about expressing her culture but the outfit wasn't appealing. Later, when Tyra called DaCosta's name to return for the following week, she told her to "think a little more glamour as opposed to natural."

Analyzing the episodes of AMNT and her behavior calls into question our own culture as Americans. Social media helps to shed light on old ways of thinking. I am not defending Tyra Banks, but I think that as time goes on, we will realize more and more how we as women, especially Black women have allowed others' opinions to shape our ideas of beauty.

Banks' new modeling theme park called ModelLand in Santa Monica, CA was supposed to open May 1st,  but the opening was postponed due to COVID-19.

I remember the one where she forced a black girl who was natural to get a perm, and then eliminated her the very next episode🙃 I would’ve dragged Tyra in front of all them cameras!
— 🕊 (@BADPerryman) May 4, 2020

What do you think about Tyra Banks being dragged for her behavior on America's Next Top Model?