Olympic champion Gabby Douglas recently shared the details on Instagram of her natural hair growth  and struggles, including the controversy surrounding her hair during her Olympic performances.

As a child, the 24-year-old said her hair was damaged due to the tight ponytails she had to wear to do gymnastics. Gymnasts are required to wear their hair back from their faces. This is to ensure that it does not get in the way of their view while they are performing. According to Gymnastics HQ, gymnasts also must not have any stray hairs sticking out either. Because of the tight ponytails, Douglas experienced breakage in the back of her hair and bald spots that she tried to hide with decorative clips.

The Olympian said she didn't even want to go to the gym because she was so embarrassed about her hair. She said, "I used to think: why can't I have healthy hair? Despite yet another challenge, I kept going. Fast forward to both Olympics and my hair was the topic of conversation [sad face]." Douglas ended her Instagram post on a lighter note saying, "Now here I am today - no extensions-no clip-ins-no wigs - no chemicals - all me [double heart emoji].

Gabby Douglas didn't say exactly how she grew her hair to her waist, but judging by her Instagram page, she might've used wigs and weaves as protective styles. 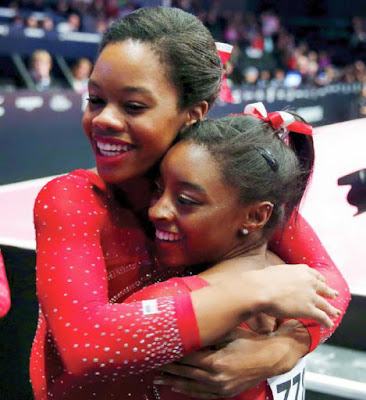 Douglas won two gold medals for the All-Around category in both the 2012 (London) and 2016 (Rio) Olympics. The internet broke talking about her hair, which was either in a bun or ponytail. During the 2016 controversy surrounding Gabby Douglas' hair, we covered the story and asked which was more important: her hair or her Olympic performance? In 2017, Mattel released the Gabby Douglas doll.

Gabby, we see you and love your hair! We are sorry for all your went through. Keep shinning!
What do you think about Gabby Douglas and her sharing her natural hair experience?