It's 2016, and it's sad to see that people are still worrying about Gabrielle Douglas' hair!
If you use the #gabbydouglas or #gabbydouglashair on social media, you will see people going in on the young lady and her strands, and it dates back to the 2012 Olympics. She is busy giving us #blackgirlmagic and showing us what she's been blessed to do, but people are still focusing on her hair? It doesn't make any sense. She's making history and bringing home gold medals. I can only imagine that she doesn't have time to be concerned about her hair doing its thing.
In 2012, Douglas was criticized, because some people thought her hair was not presentable for the Olympics in London. The 16-year-old appeared on the Oprah Show and expressed how much the comments upset her. The craziest part about it was that most of the criticism came from Black women, and it's still the same case. We're supposed to be uplifting her! She's doing her thing on the uneven bars, but you're worried about her hair? It says a lot about whoever is making the comments. Let's get it together! 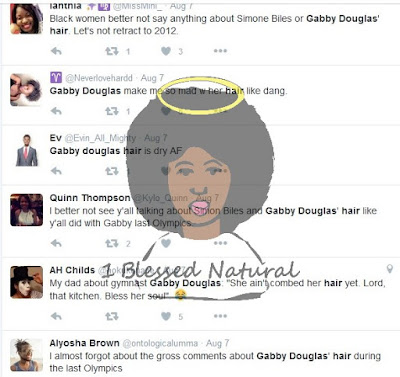 My question to anyone who is concerned about her hair is this: If her hair was slicked down, and (God forbid) she fell and hurt herself, what would you say? I'm quite sure that if she cared about her hair as much as you do, she wouldn't be at the Olympics. Furthermore, when you work out, do you not sweat? Also, your priorities must not be in order, but I can tell you that Gabrielle Douglas' has hers in order. She worked hard to come to the 2016 Olympics, and by God she made it! So, let's stay focused on the IMPORTANT THINGS! To Gabrielle Douglas: Go get 'em, girl!

What do you think about the comments about Gabrielle Douglas' Hair?