Today, Zendaya Coleman released her response on social media to Giuliana Rancic's heartfelt video apology that aired yesterday. Giuliana's video apology was in addition to the one on Twitter. The host stated that she did not intend to offend anyone, but realizes that it is not about her intent; it is about the result. Rancic said she learned it is important not to perpetuate stereotypes. She said, "...this incident has taught me to be a lot more aware of cliches and stereotypes and how much damage they can do. Rancic continued by saying, "...I am responsible (as we all are) to not perpetuate them further." In her response, Zendaya Coleman made the point that prejudices are often hidden, but affect our actions. She said, "The hidden prejudices is often influential in our actions." She continued to say that she fought against her the urge of responding negatively to Rancic's comments. The young actress accepted her apology and invited others to do the same. 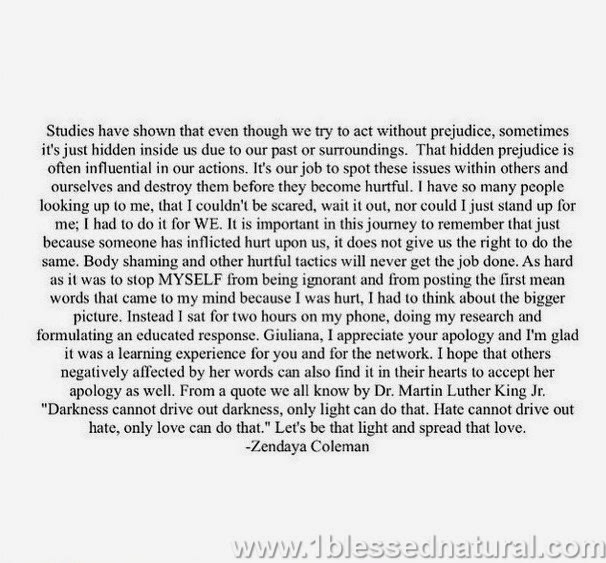 On Monday night's episode of E!'s Fashion Police, Rancic said the young actress' dreadlocks made her appear as though she smelled like patchouli oil or weed. In response, Zendaya released a statement via social media, educating Rancic on stereotypes and suggesting that she think before speaking. She said, "I suggest some people should listen to India Arie's "I Am Not My Hair" and contemplate a little before opening your mouth so quickly to judge."

Since then, Coleman has gained support from other women in the entertainment industry including India.Arie. Yesterday, the singer penned an open letter to Zendaya on her website. In the letter titled "SongVersation: Beautiful Flower", Arie commended the actress for her response to Rancic. She also said Rancic's comments were about race. The singer said, " I'm not calling Giuliana Rancic a RACIST,..but OF COURSE  it has to do with RACE. To say it has “Nothing to do with race” .. THAT’S why people get mad." India. Arie continued by suggesting that Zendaya look at Rancic  from a social context, and how race is an issue in the entertainment industry. She said, "I'm sad theres [sic] an actual form of entertainment where people are excused to be snarky and unkind, that's the REAL issue."

I am glad Giuliana Rancic sincerely apologized to Zendaya, and she accepted it. I think her statement about taking responsibility to not perpetuate cliches and stereotypes was correct. In order for one not to do as Rancic did, they must step inside the other person's shoes. They may need to understand a little of their history and experiences. India.Arie's letter addresses the issue in the entertainment industry, well. I have always loved her for her refusal to adhere to anyone else's standard of beauty.  Zendaya boldly and stunningly stepped out on the red carpet with her dreadlocks like many Black women (including myself) who have done the same, stepping out into the world rocking our natural hair.

I believe that if this incident happened (along with many others) 10 or 15 years ago before social media became as big as it is now, it would have been swept under the rug. I love the conversations though. I love the fact that celebrities can settle disputes and show support through things like open letters. After Zendaya released her statements, I saw many other people (especially naturals) repost the letter in support.  The letters, tweets, and statuses start conversations that need to happen. I would close this article off by saying that hopefully, nothing like this happens again. However, I think those hidden prejudices that Zendaya spoke about will reveal themselves again. So, we'll have to see.


What do you think of Giuliana Rancic's apology and India.Arie's open letter to Zendaya Coleman?