Ava DuVernay Doll Sold Out in One Day!

Earlier this month, Mattel announced that it would be releasing a special collector's edition Barbie honoring Oscar Award-winning Selma director, Ava DuVernay. When the doll went on sale on December 7, 2015 on both the Barbie Collection and Amazon websites, it sold out the same day, leaving fans asking when it would be available again.

On December 8th, Mattel released tweets stating that the Ava DuVernay dolls were collector's items and sold out quickly. Only 999 of them were available to be purchased. This left many fans disappointed. One of the doll's fans asked on December 18th about its availability, and Mattel tweeted, "We're so sorry, at this time, the doll is sold out and we don't have plans to release more."

Since the doll sold out on Amazon and Barbie's site, I've seen it on Ebay for more than $400.00. The doll's original sale price on the Barbie Collection website was $65.00.

One good thing is DuVernay announced that all proceeds from the doll would be going to the Color of Change and Witness charities. I am happy that the proceeds went to charities, and I am proud of Ava DuVernay. But, I feel sorry for everyone who was not able to get one. Plus, I would have loved to purchase one for my sister who is a doll collector. I hope Mattel changes their mind! 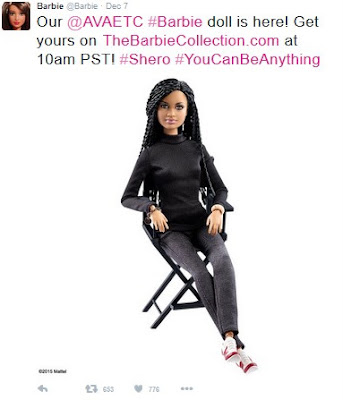 @ojsbabygrl2002 Dolls on The Barbie Collection sold out, but more will be available from Amazon later today.
— Mattel (@Mattel) December 7, 2015

@connichameleon We apologize if you were not able to purchase the Ava doll. As a Platinum label doll, only 999 dolls were available. (1/2)
— Mattel (@Mattel) December 8, 2015 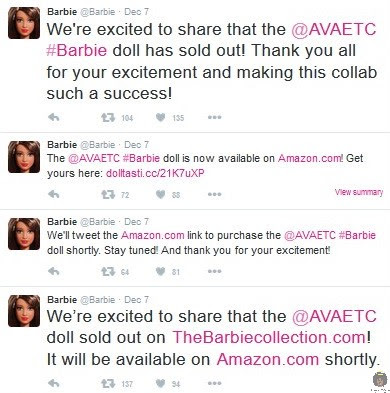 Did you try to purchase the Ava DuVernay Barbie doll?

Related Articles: Review of the 10 Inch Michonne Deluxe Action Figure...
Viola Davis Inspired Her Daughter to Dress Up Like Her...
5 Ways to Teach Your Daughter to Love Her Natural Hair