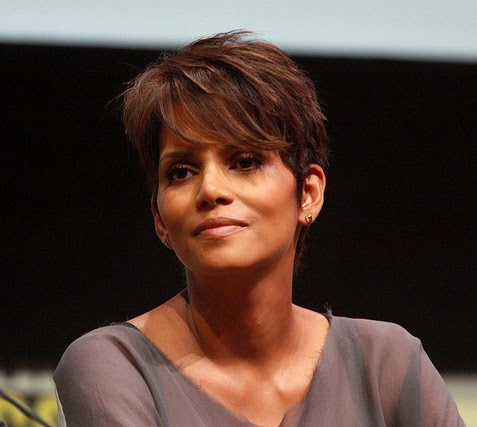 
Yesterday, TMZ reported that Halle Berry took her ex-boyfriend, Gabriel Aubry to court because he allegedly straightened and highlighted their 6-year old daughter, Nahla Aubry's hair.  According to the report, the judge ruled for the parents to let the little girl's hair grow out naturally. While I think a court visit to make a decision about her daughter's hair is a bit excessive, I agree with Ms. Berry all the way! Their daughter is too young to use harsh chemicals on her hair. Also, fathers' opinions of their daughters can have a large effect on their self-esteem.

If the report is true and Gabriel Aubry really straightened and highlighted his daughter's hair, I believe he's dead wrong. We're suppose to be teaching the youth to love themselves. According to TMZ, Berry's words were that Aubry who is French-Canadian was trying to make their little one look white. If he did not want a child who looked Black, he shouldn't have chose to conceive a child with a Black woman. It's that simple!

Moreover, dyeing a 6-year old's hair can be harmful to their hair, scalp, and health. Because their hair and scalp are fragile and still growing, applying chemical dye can cause permanent changes in the texture of  their hair. It can also cause allergic reactions to a child's skin and scalp. Womenshairabout.com adds by saying, "Many recommendations indicate that chemically changing a child's hair prior to puberty age is not ideal. Kid's hair before this time is typically thinner and more fragile and can be easily damaged by even the most gentle hair color formulations."I am not sure what type of method Aubry used to straighten his daughter's hair, but perms at an early age caused my hair texture to  permanently change in certain areas of my head.

In addition, many of us in #teamnatural (including myself) can cosign on the mental and emotional side effects of having to change your natural hair at an early age. The biggest and most important effect is low self-esteem or feeling like your natural hair is unacceptable. I also believe this would be 10 times worse for a daughter whose father makes her chemically alter her hair. Fathers set the tone for men later on in a young lady's life. If she is told by her father that her natural hair is not good enough and has to be changed, I can only imagine what she will change for the man she dates and/or marries later on in life.

In closing, I give Halle Berry two thumbs up for making the decision to not straighten and dye her child's hair. Let little Nahla learn how to love and maintain her natural hair. Her dad should too!

What do you think?

Don't forget to ENTER to WIN in the 1BlessedNatural Christmas Giveaway!