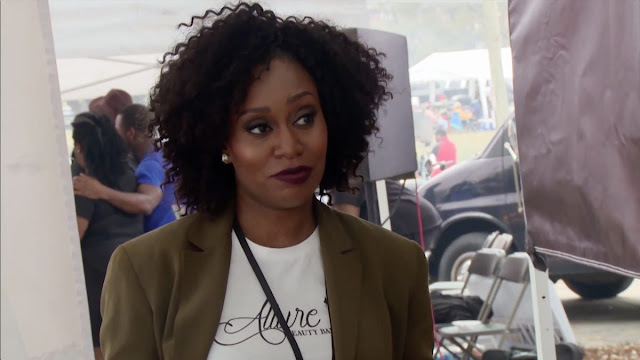 Hey, my blessed naturals!
Who else saw the craziness on Season 2/Episode 3 ( Don't Reign on My Parade) of Cutting It in the ATL? (Raises hand) ME! This week, the women attended a parade and things got ridiculous, again!


The episode begins with Dedra and Pat at a cafe talking about the drama between Pat and Maja. Dedra was loving the fact that Pat messed up Maja's shop. I wonder if Pat went after any of the owners of the other $50.00 weave spots... Meanwhile, Maja tells Beautii about Pat's visit to her salon. She also invites Beautii to the Magic City Classic parade in Birmingham, AL, because she is being honored by her alma mater, Alabama's A&M University.

Maja presents Beautii with the challenge of selling 100 tickets to her mobile salon to prove her business is one that Maja should invest in, and Beautii is up for the challenge.

Next, Mushiya invites LaKenya to the parade in Birmingham. She also says she's going to educate the state on natural hair! I was laughing to myself because they are the home of one of the biggest natural hair shows in the U.S: The Natural Hair and Health Expo. You gotta love her confidence though! LOL.

1BN's Thoughts: LMBO! How long did it take LaKenya to learn that song?

Mushiya tells LaKenya she is too easy going. She also says that Maja bullies LaKenya. At this point in the show, I was dying with laughter! Mushiya must have forgotten how she treated LaKenya last season when she got in her face and crashed her party. In her confessional, she says she is going to get Maja back for bullying her new business partner.

On their way to the parade, the two salon owners stop at a salon so that Mushiya can do a presentation. BTW: Did anyone catch LaKenya singing Mushiya's song? LMBO! How long did it take her to learn it???

Mushiya's not impressed with the inside or outside of the press and curl salon. There was a sign posted in the shop that said "No Profanity", but that's not stopping Mushiya, lol. Not only is she cursing, but she's also insults the salon owner, customers, and stylists. She even laughs when the salon owner says they are a natural hair salon, because she feels they don't deal with the natural texture of the hair. I guess that's something to think about...

Dedra has a bonding session at her salon with her mother. It's nice to see them getting along. Last season, the mom of three revealed that she didn't have a great relationship with her mother.

Next, Maja and beauty are at the parade waiting for Maja's float to arrive. The truck with the float was stuck blocks away from the parade, so the two salon owners start decorating an SUV with Maja's promo banners. While Maja is stressing, Mushiya shows up. Perfect timing! LOL Mushiya goes back and forth with Beautii. I was cracking up when Maja asks Mushiya if her entourage could help her decorate!

Mushiya plays loud music and sits on one of Maja's friends' car. When Maja asks Mushiya to chill, her husband jumps in. Maja's float arrives along with kids who are rocking her brand's t-shirts. Still, Mushiya has no chill button. She has risqué and profane parade banners and is being a mess. When LaKenya tries to tell her to stop, she refuses. So, LaKenya does the unthinkable and gives herself a haircut. I was like : Nooooo! Then she tells Mushiya she doesn't want to be an ambassador for her brand anymore.

It's funny because Mushiya says that she behaves the way she does to teach people lessons about business, but throws shade the whole way!

1BN's Thoughts: LaKenya, make sure you have a ride first!

Then LaKenya joins Beautii and Maja on the float and tells them what happened. However, Maja is still not feeling her, and LaKenya becomes known as the "flip-flopping traitor." By this point, I'm wondering if LaKenya has a ride back home LOL. Maja says she is going to do the decent thing and give her one, but she also plans to teach her a lesson. Yikes! Beautii gives LaKenya a talk about loyalty and fixes her hair.

Dedra and Tre Stylez catch up on all of the drama between the ladies. Beautii sets up her booth after the parade and struggles to get clients coming in. Of course, Mushiya sets up her booth right next to Beautii's and blasts her theme song, singing and all! Maja notices Beautii doesn't have any customers and decides not to invest in her idea. In her confessional, Maja reveals that she did admire Mushiya's hustle, even though her delivery is off At least she's a good sport about it... Maja can separate business and personal issues, and I like that about her. It's so crazy to see Black business women be catty! Hopefully, they will get it together, or maybe they won't LOL.

The next episode comes on next Thursday 10/9C on We tv!

What did you think of this week's episode of Cutting It in the ATL?