My Reaction to the SheaMoisture Commercial that Received Backlash


Since the beginning of my (adulthood) natural hair journey, I was there for SheaMoisture. Every time I heard the name I associated it with Black women and the natural hair movement. After hearing about the controversy surrounding their latest commercial, I decided to see the commercial for myself.  When I watched it, I felt no connection to it at all.

Even though the commercial included one woman who was natural, she looked like she could be bi-racial and had a loose hair texture. In the one minute video, the camera moves from the natural to 3 white women. The natural and blonde-haired women talk about how hard it was to accept their hair and hair color. The commercial ends with "Everybody Gets Love"-- that kumbaya moment (rolls eyes).

I'm guessing the company made the decision to include "everybody" from a business standpoint. However, I don't understand excluding kinky hair in their commercial. I know their products were established in 1912, but they have been marketing to the natural hair community heavily for the last 6 or 7 years. I've been rooting for them since 2012 (a year after going natural), but again, I felt no connection to the new commercial and now ultimately the brand. 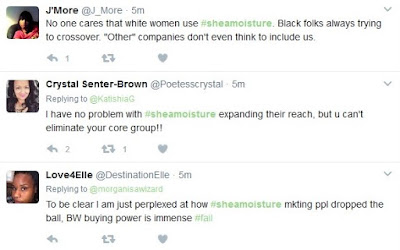 Since the release of the commercial, SheaMoisture has received so much backlash from Black women who are hurt. There are also some who say "get over it" and are not bothered by the commercial. I think there is nothing wrong with appealing to a bigger audience, and you have to be realistic about that when talking about business. However, the move to not include the people who were such a big part of the development of the brand is a no-no!

Yesterday, the company released a public apology on Facebook to their "#SheaFam," explaining that they messed up and were removing the advertisement altogether. According to SheaMoisture, the commercial was a part of a larger campaign that included other ethnicities. They said,"We must absolutely ensure moving forward that our community is well-represented in each one so that the women who led this movement never feel that their hair journey is minimized in any way."

If you're wondering about who is included in "our community,"  it is the Black community. SheaMoisture is a Black owned company which adds to the shock of the commercial. When you're talking about advertising, this means a group of people sat down and decided on every element in the video, what to include or not. SMH. If you haven't seen it, check the video out below and let me know what you think!

What do you think about the new SheaMoisture commercial and their apology?