The Kickstarter campaign for the new animated natural hair short film called "Hair Love" by Matthew A. Cherry has surpassed its goal of $200,000! As of today at 9:14 pm, they've raised over $204,509.
The short film "Hair love" will be centered around a character named Stephen doing his young daughter Zuri's natural hair.

Cherry says he was inspired by videos of fathers doing their daughter's hair and wanted to represent that on screen. On his Kickstarter page, the producer says,"This story was born out of seeing a lack of representation in mainstream animated projects, and also wanting to promote hair love amongst young men and women of color." His original goal was $75,000 for the project. The character "Zuri" was created by artist Vashti Harrison. The film will be co-directed by Jason Marino.

Celebrities like Yara Shahidi have been showing their support of the campaign on social media. I remember how exciting it was to see a character with natural hair in the animated film "HOME" by Dreamworks, so I know this movie is going to be awesome! The "Hair Love" Kickstarter campaign ends on August 9th! So, you still have time to donate. Visit the "Hair Love"  Kickstarter page to support the campaign! 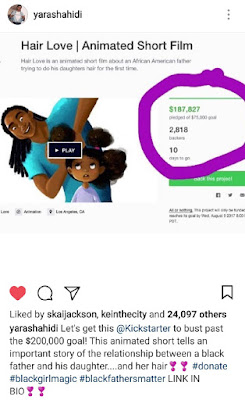