The Origin of Aunt Jemima


Today, the owner of Quaker Oats Company, PepsiCo announced it will be removing the Aunt Jemima name and image and rebranding its line of products. The company's action is in response to the recent Black Lives Matter movement involving protests of the deaths of George Floyd and Breonna Taylor. Aunt Jemima products include pancake mix, syrup, cornmeal, and grits. To understand why the removal of the Aunt Jemima brand is significant, you must understand the character's origin.

Aunt Jemima's character was created in the 1880s. She was based on the idea of the Black mammy. The Oxford dictionary defines mammy as "offensive." It is "(formerly in the southern US) a black nursemaid or nanny in charge of white children." As a result, the mammy was seen as warm, happy, servants, and/or slaves of white families.

According to Sticky Figures, Aunt Jemima's name came from a Black comedian by the name of Billy Kersands who did minstrel (black-face) shows. The name came from his song, "Old Aunt Jemima." In 1889, the owners of the Pearl Mill Company Chris Rutt and Charles Underwood used the "Aunt Jemima" name to launch their pancake flour mix.

After R.T. Davis purchased the Aunt Jemima Manufacturing Co. in 1890, he hired Nancy Green, a former slave, and servant to do demonstrations with the pancake mix as the character Aunt Jemima. She played her in 1893 at the World Fair in Chicago Illinois.

As we work to make progress toward racial equality through several initiatives, we also must take a hard look at our portfolio of brands and ensure they reflect our values and meet our consumers' expectations. We recognize Aunt Jemima's origins are based on a racial stereotype. While work has been done over the years to update the brand in a manner intended to be appropriate and respectful, we realize those changes are not enough.

Some of the changes that Kroepfl spoke of included changing the logo of Aunt Jemima which formerly included a dark-skin woman  dressed in "mammy" clothing -- a headscarf. Now, the logo is the picture of a lighter smiling Black woman with curly hair, pearls, and a white collar. 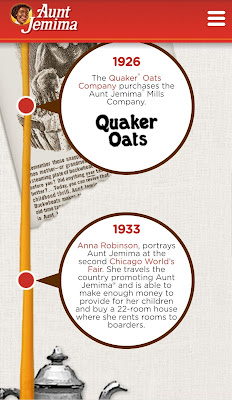 Kroepfl said the company "will continue the conversation by gathering diverse perspectives from both our organization and the Black community to further evolve the brand and make it one everyone can be proud to have in their pantry."

Since Pepsi made their announcement, MARS, the owners of Uncle Ben's rice announced that they are following in the footsteps of Aunt Jemima and will be undergoing a "brand evolution".

What do you think about the origin of Aunt Jemima and changes the company is making?