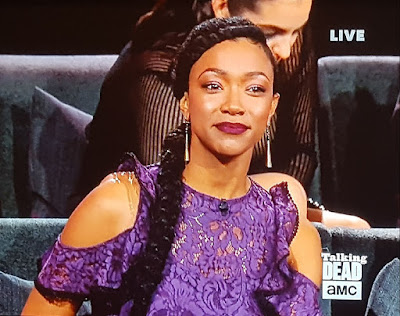 Tonight, Sonequa Martin-Green wore her natural hair in a cute side (side halo-ish) braid on the Talking Dead show! The actress surprised her fans with an appearance to celebrate the 100th episode of The Walking Dead.

*SPOILER ALERT* If you are a Walking Dead fan, you probably know that Green's character "Sasha" was killed last season (season 7). Green is now a lead actress on the "Star Trek Discovery" show. On Talking Dead, the actress' hair was parted on the side and cornrowed around her bang area and past her ear toward the back. Hair appeared to be added for length.

Sonequa Martin-Green's natural hairstyle on tonight's episode of Talking Dead reminded me of the flat-twist style she wore on the show back in 2013. Both styles are simple and cute!
Plus, it was good to see her back on the show and with the whole cast! 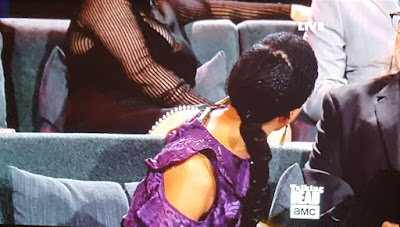 We miss you on The Walking Dead, Sonequa!